The Chair of Chemical Engineering is currently equipped with the following analytical devices: 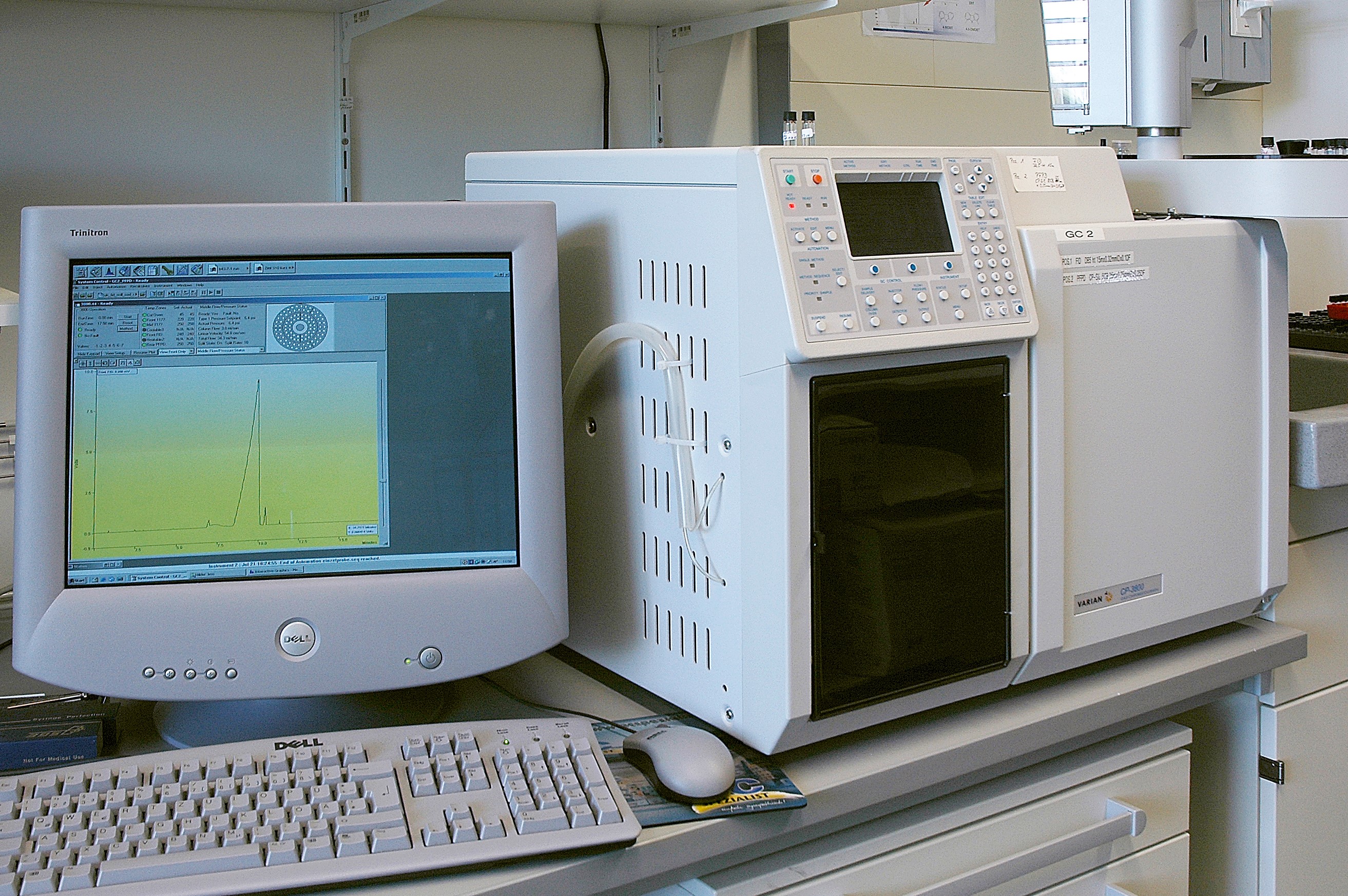 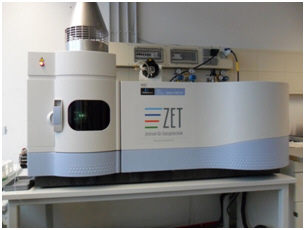 Inductively coupled plasma optical emission spectroscopy (ICP-OES) is an analytical technique used for the multi-element analysis of approximately 70 elements. A peristaltic pump delivers a dissolved sample into an analytical nebulizer where it is transformed into an aerosol and introduced directly into the very hot (about 10.000 K) radio frequency argon plasma. The plasma is used to produce excited atoms and ions that emit electromagnetic radiation at wavelengths characteristical for a particular element. The intensity of this emission is proportional to the element concentration. Commercially available standards can be used to calibrate the ICP-OES, which makes it possible to perform highly quantitative analyses. 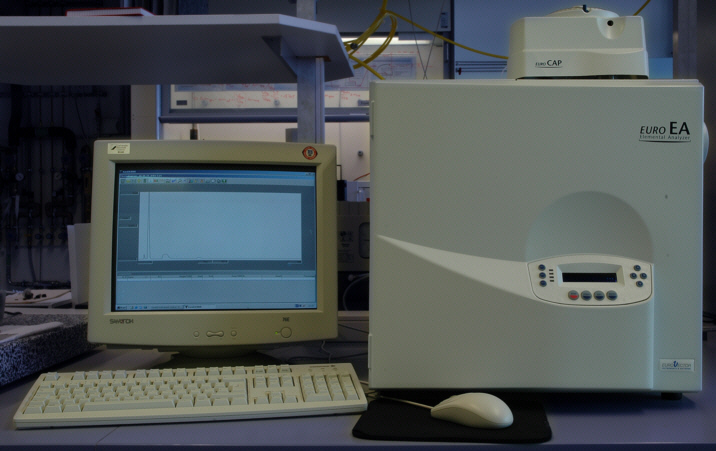 The elementaranalyser EA 3000 (company: HEKAtech) allows you to determine simultaneously the elements carbon, hydrogen, nitrogen and sulphur. With a second reactor the determination of oxygen is also possible.

2-3 mg sample will be weighed into tin capsules and will be solubilized oxidative in an oxygen stream at approximately 990°C. The complete oxidation will be underwritten by a folowing wolframetrioxid catalyst. CO2, H2O and NOx are expected as products. The rest of the oxygen will be bound in a column with copper granulate and nitrogen oxides will be reduced to nitrogen. The gas mixture contains the analytgases CO2, H2O, N2 and SO2. High-purity helium is used as carrier material. The separation and quantification takes place in a gaschromatographe and the detection is done by a thermal conductivity detector. 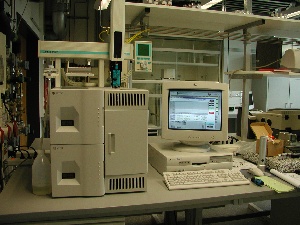 The Antek 9000NS analyser offers the parallel measurement of the total sulphur and nitrogen in liquid samples; the analyser is equipped with an auto sampler. The accuracy of analysis down ppb level for both elements. The sample volume for a single measurement ranges from 5 -15 µl, depending on the sulphur or nitrogen concentration of the substance. An accuracy of about ±2% is achieved.
The measuring principle is based on complete combustion of the sample at 1000 to 1100°C in an argon/oxygen-stream transforming sulphur to sulphur dioxide and nitrogen into nitrogen oxide. A membrane dryer removes the water from the resulting gas mixture to prevent condensation on the detectors avoiding biased results.
The sulphur dioxide concentration is determined by based on UV fluorescence; SO2 is excited by light and emits photons with a certain wave length. Nitrogen detection is based on chemiluminescence. For this purpose, nitrogen oxide formed during combustion is transformed by ozone, guided into the nitrogen-analyser, into excited nitrogen dioxide. On returning to the ground state, the electrons emit photons having small band width in their energy. The radiation, generated in the nitrogen- and sulphur-analyser, is amplified by a photomultiplier. The evaluation of the signals occurs computer-controlled by an adjustment with the density and by comparison with standard solutions. 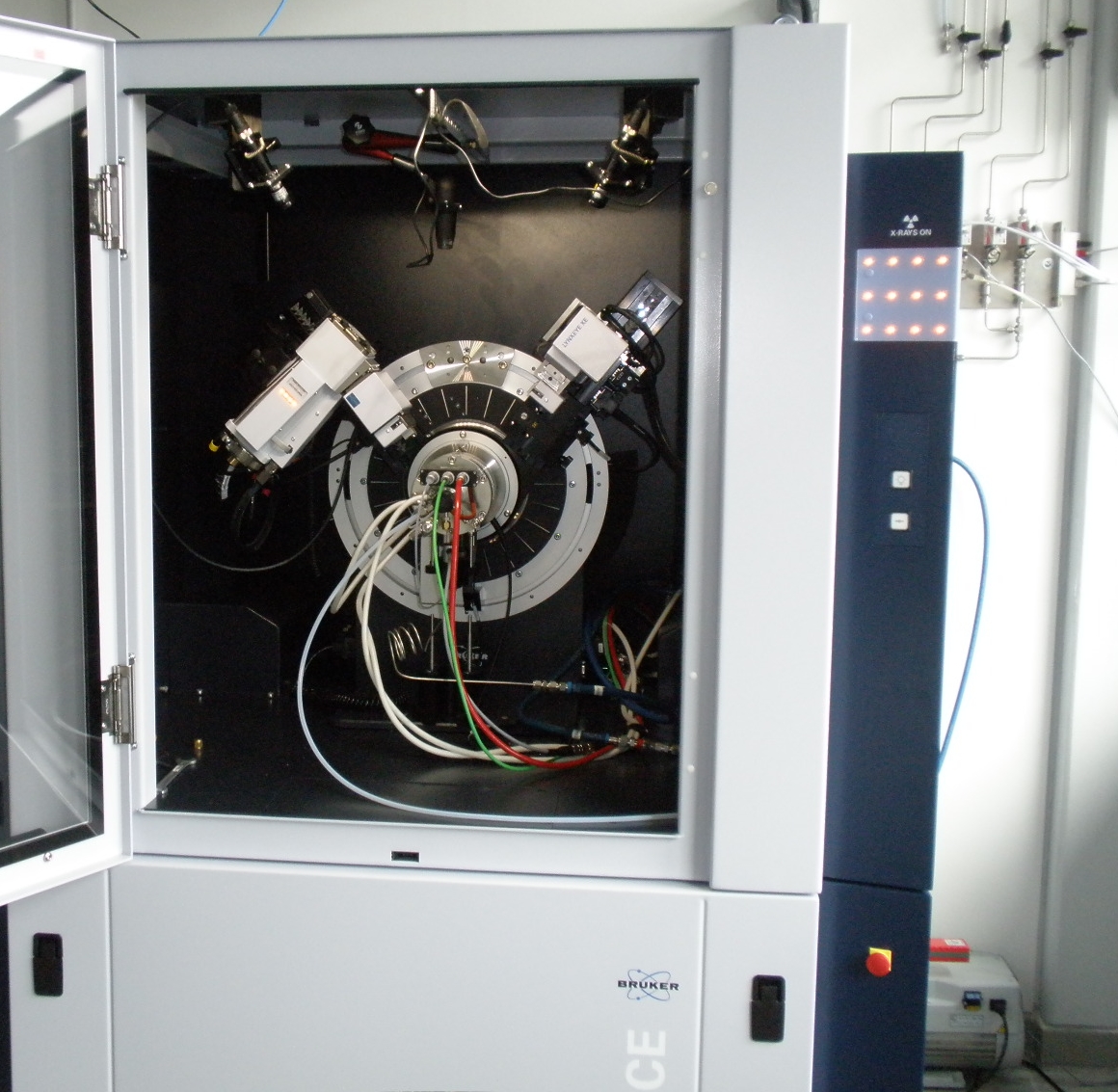 With X-ray diffraction (XRD) structural and compositional information on materials can be gained. Thus, with an appropriate database for comparison, the phases in the material can be identified and quantified. Crystallite sizes can be determined also.

With the Bruker D8 Advance and Anton Paar XRK 900 measuring cell thus the structure and phase composition of a catalyst and in situ phase changes under reaction conditions (pressure to 10 bar, temperature to 900°C) can be examined. 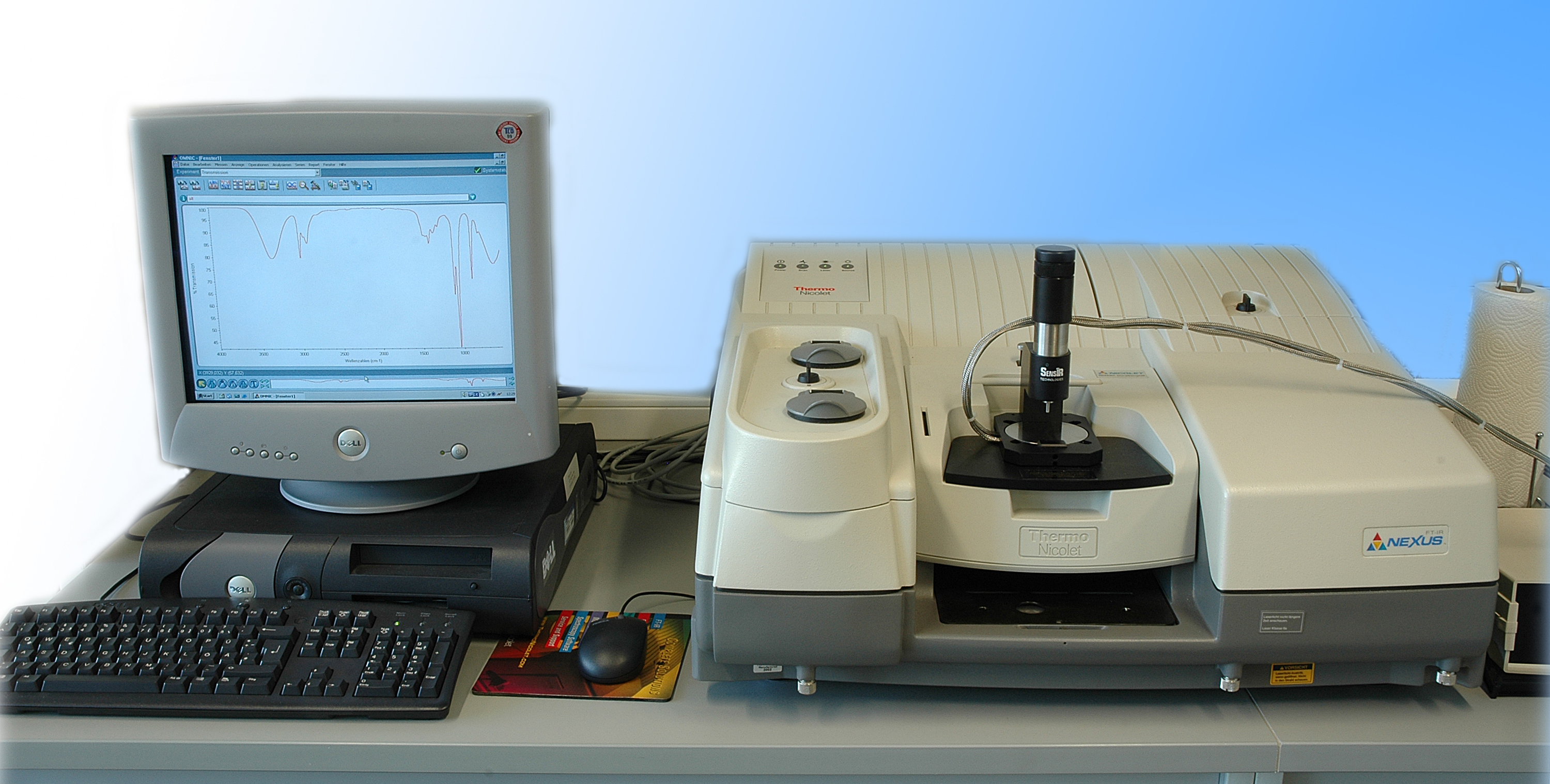 in the system the mirrors are so arranged, that they build a so called Michelson-interferometer. The light coming from the IR-source is splitted by a beamsplitter in two single radiators. 50 % of the light is reflected to the fixed mirror and 50 % is transmitted to the moveable mirror. Light travels to each of the mirror and recombines at the beam splitter before passing through the sample and to the detector.
As the light intensity of the recombined beam is recorded at the detector, the moveable mirror travels towards the beamsplitter, producing an interferogram. As the moveable mirror travels, different frequencies are reflected in different ways. The summation of construcive and destructive interference over time makes an interferogram, from which a Fourier transform is used to calculate a spectrum. 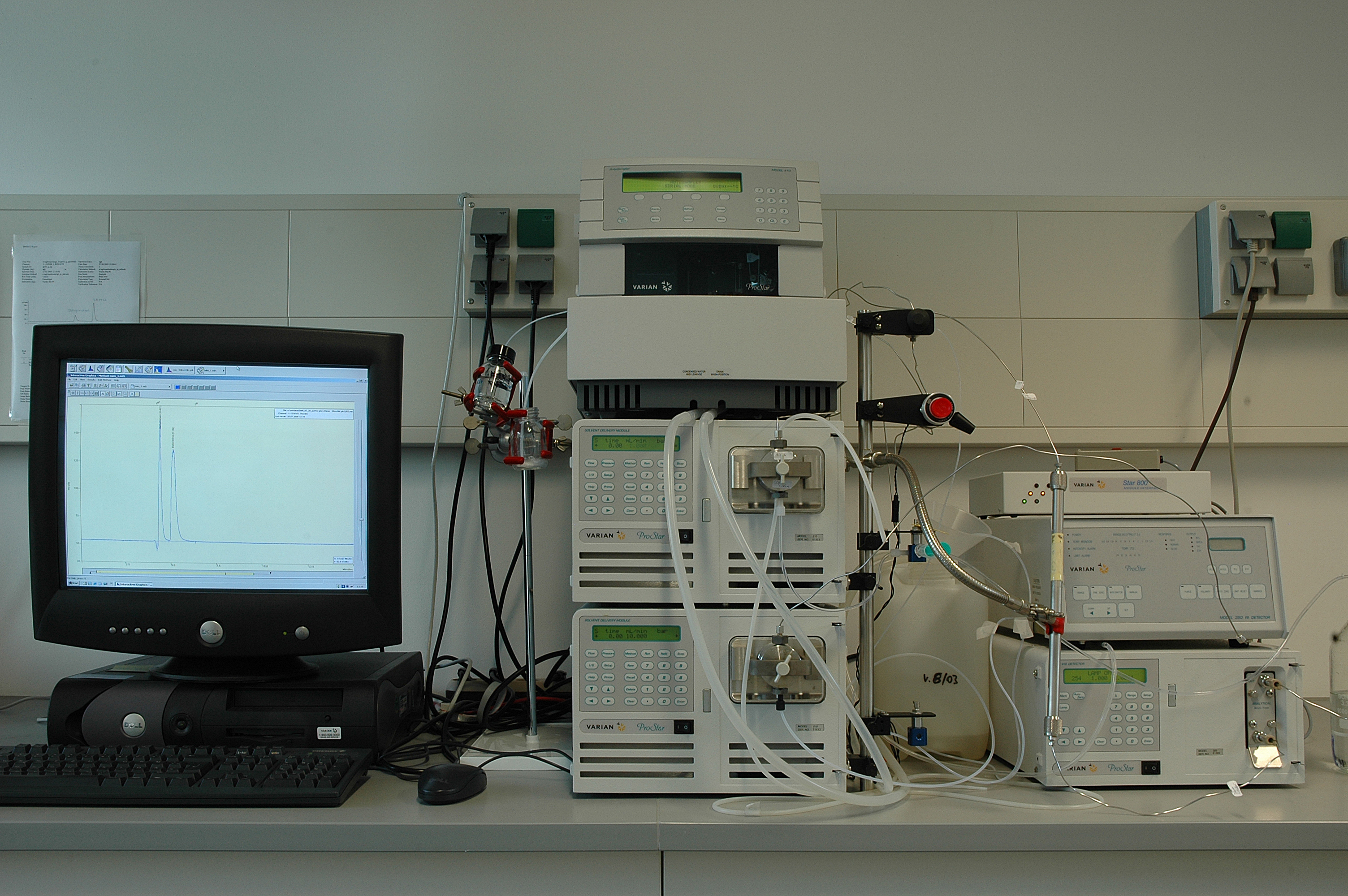 High-performance liquid chromatography (HPLC) is a form of liquid chromatography to separate compounds that are dissolved in solution. HPLC instruments consist of a reservoir of mobile phase, a pump, an injector, a separation column, and a detector. Compounds are separated by injecting a plug of the sample mixture onto the column. The different components in the mixture pass through the column at different rates due to differences in their partitioning behaviour between the mobile liquid phase and the stationary phase. 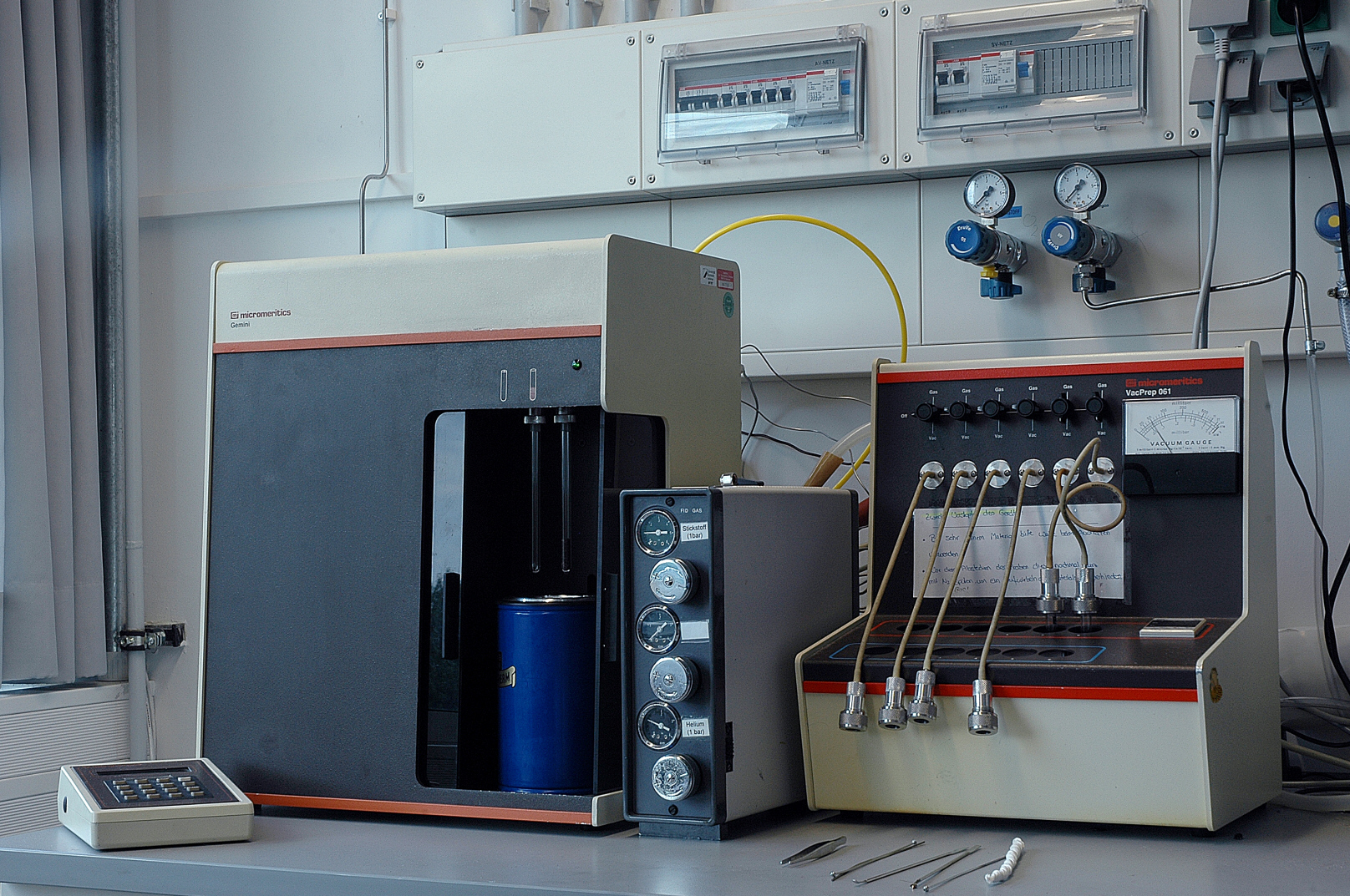 In fine-grained and/or porous solids the specific surface area is an important parameter in the characterisation of a material. Thus, process and quality control are largely predicted on measurements of the specific surface of adsorbents, catalysis, fillers, fertilisers, cement, metal powders, pigments, pharmaceuticals, ceramic materials and many other solids. Among the many and varied methods used to determine the specific surfaces areas of dispersed or porous solids, low-temperature gas adsorption according to Brunauer Emmet and Teller (BET) is of particular importance.The background of the measurement is the determination of the adsorbed amount of a certain gas on the surface of a solid - within a constant temperature – as a function of pressure. Most generally nitrogen is used as an adsorption gas which attaches to the surfaces of solids by weak-interaction physisorption (van-der-waals-forces). 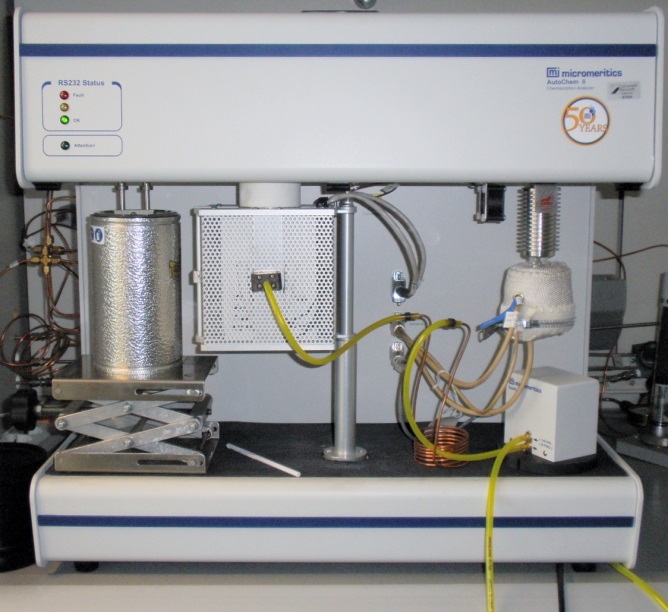 The AutoChem II 2920 (Micromeritics) is a fully automated chemisorption analyser and can measure the temperature programmed reactions mentioned above, as well as metal surface areas by dynamic chemisorption measurements (pulse titration). Liquids at room temperature can be used as probe molecules due to a built – in vaporiser. Additionally, single- and multipoint BET surface areas can be determined by dynamic measurements. 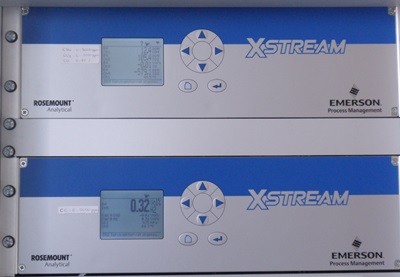 15 general purpose continuous gasanalyzers measures up to five components simultaneously in various combinations.
These five components can be measured with NDIR/UV/VIS photometer, paramagnetic or electrochemical O2 and thermal conductivity.
Our gasanalyzers are equipped with CO, CO2, O2, CH4, H2, NO, NO2 or SO2 detectors.
Modern communication capabilities including web-browser functionality, RS 232 and analog output. 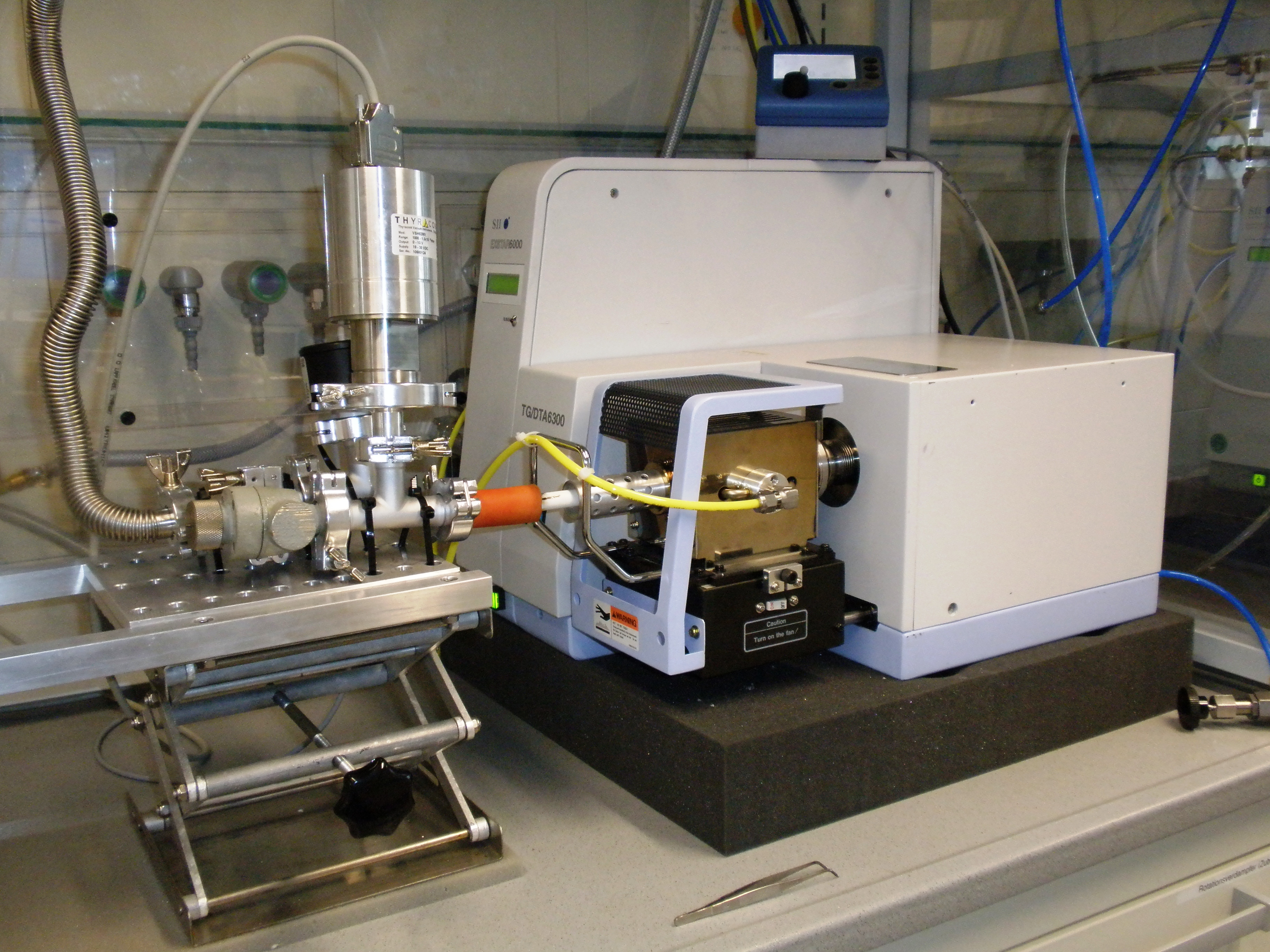 As is known, some physical or chemical processes can be characterized by a change in mass as well as evolution or absorption of heat. Both these characteristics can be defined by TG and DTA methods, in the course of which a sample is subjected to reaction conditions under either an isothermal regime or a programmed temperature run. Proceeding from the information obtained during such measurements, some kinetic parameters can be determined or estimated.
For carrying out such investigations, CVT uses TG/DTA 6300 device (Seiko Instruments Inc.) allowing us to expose samples to temperatures up to 1300°C with the temperature rise rate up to 20°C/min..

Among our investigations, there are nearly all typical physical and chemical processes such as:

As a representative example, the original data generated by TG/DTA 6300 in the reaction of a Ni-catalyst activation are shown in Figure. 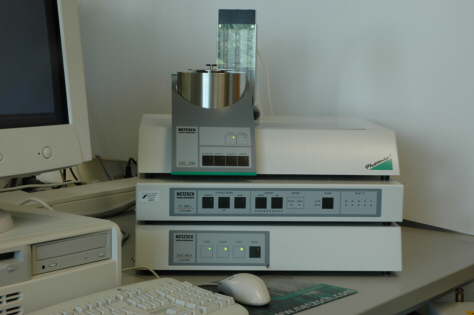 With the aid of the Differential Scanning Calorimetry you are able to determine the glass-, melting and decomposition temperatures as well as melting-, reactionenthalpy and heat capacity. The raw data can be used to identify the material and quantify it and allows a conclusion about the grade of the cristallinity and cross-linking. Measurement range: -180°C bis 700°C. 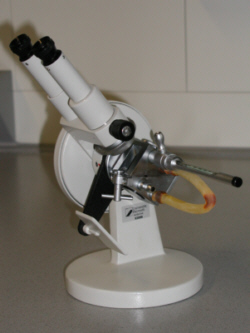 The optical composition of this refractometer makes it possible to identify precise the critical angel with a thin layer of liquid, which is located between two glass prisms.

Refractive index and mean dispersions belong to one of the important optical constants in substance, which can be used to check in substance optical performance, purity, concentration and dispersion etc.

The Abbe-Refractometer is suitable for the following determinations: 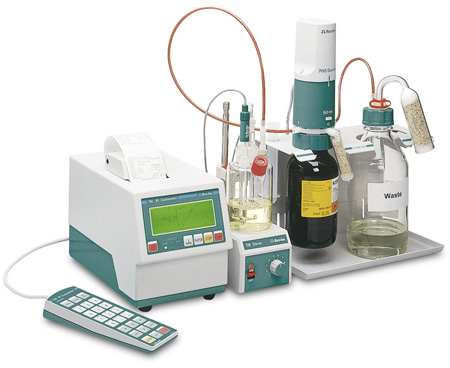 We use a KF-Coulometer 831 (Metrohm) for the coulometrical water determination by Karl Fischer. The measuring cell consists of an anode and a cathode room which are separated by a diaphragm. The liquid sample is injected in the anode room through a septum.

In the KF titration one uses the redox reaction between iodine and sulfur dioxide, which proceeds only in presence of water:

Solvent is anhydrous methanol which reacts with SO3 to sulfuric acid ether. The protons are neutralized with a Bronsted base. The reaction is finished, if an iodine excess is reached. The water content of the sample can be read directly form the display in µg water resp. in ppm or percent. 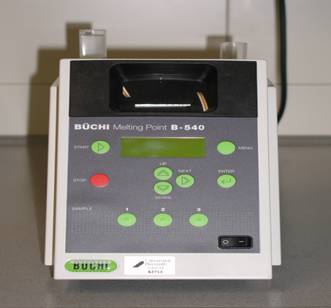 Three different samples can be analysed simultaneously. The detection of the values is done by visual study of the sample by the operator. 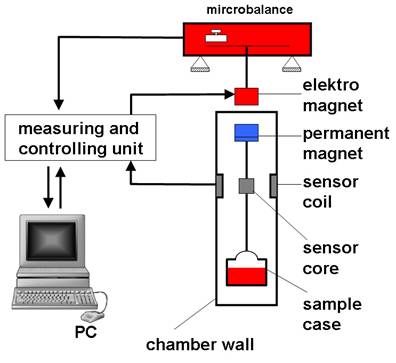 The atmospheric disjunction of microbalance and sample in the MSB allows the measurement of weight changes of samples under severe conditions (T< 250 °C, p < 400 bar). Because of the very high precision (- 0.01 mg) of the microbalance, this technique is particularly suitable to study the sorption of gases in liquids or solids. Therefore an interesting field for application of a MSB is the determination of sorption and diffusion properties of gases and gas components in ionic liquids (ILs) or in polymers.

The sample is placed in a magnetic field and the NMR signal is produced by excitation of the nuclei sample with radio waves into nuclear magnetic resonance, which is detected with sensitive radio receivers. The intramolecular magnetic field around an atom in a molecule changes the resonance frequency, thus giving access to details of the electronic structure of a molecule and its individual functional groups. The most common types of NMR are proton (1H) and carbon-13 (13C) NMR spectroscopy, but it is applicable to any kind of sample that contains nuclei possessing spin. 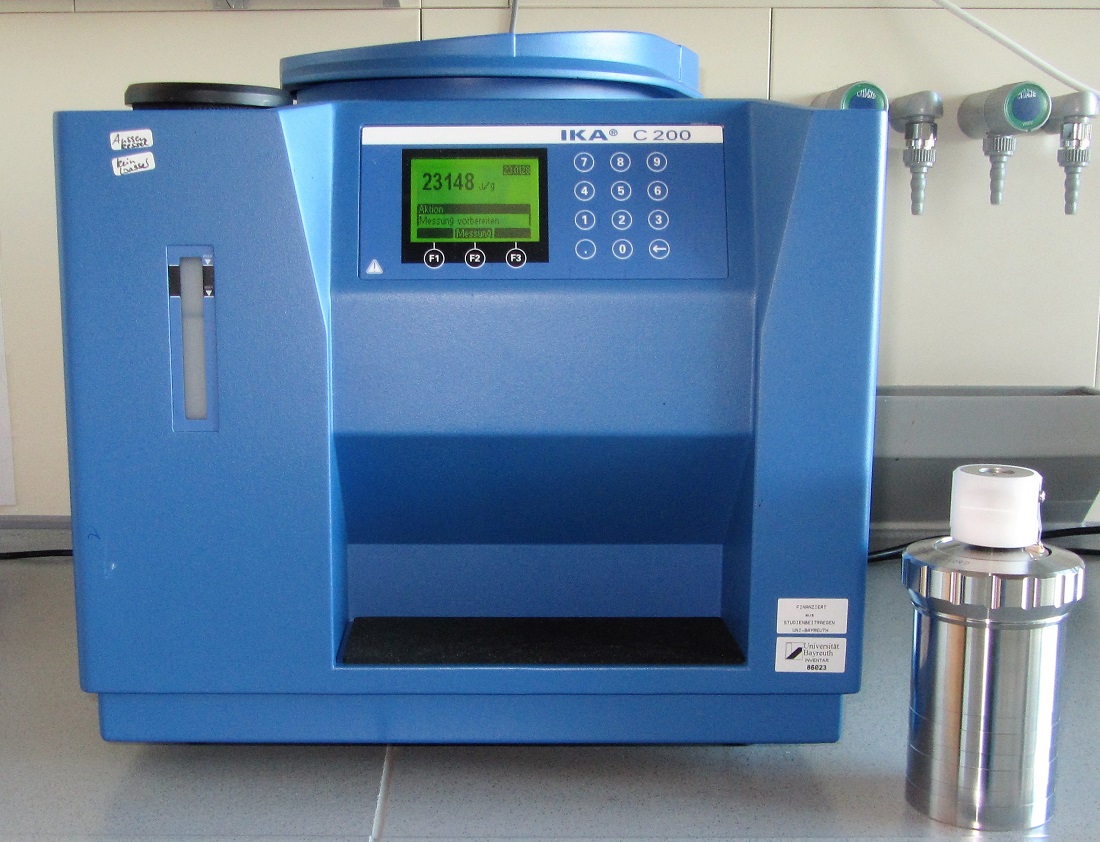 The gross calorific value is determined in a bomb calorimeter (IKA C200) in an oxygen atmosphere and at a pressure of 30 bar. A bomb calorimeter consists of an enclosure in which the reaction takes place. The substance to be determined is placed in the bomb and electrical energie is used to ignite the sample.The surrounded water absorbs the heat of the reaction and thus increases in temperature. Measurement of this temperature rise and a knowledge of the weight and heat characteristics of the container and liquid permits the total amount of heat generated to be calculated.